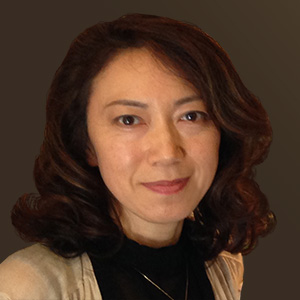 Hello! Thank you for visiting. Let me tell you a little bit about myself. I was born on Rebun Island, a small fishing village off the northernmost tip of Japan. When I was young my family traveled extensively which gave me the chance to explore the spectacular scenery and beautiful wildflowers of northern Japan. I moved to Sapporo to be with my sister and continue my education when I was 15. While studying fine arts at Hokkaido University of Education I discovered metal work. Later I earned an Associate Degree with a major in jewelry design at the Fashion Institute of Technology in New York City.

Initially I produced large embossed works, but eventually I turned my attention to sculpture, objects of art, and eventually jewelry. In 1995, my first jewelry collections were produced for the Japanese market by a high-end jewelry company located in Osaka, Japan that specialized in 18k gold, platinum, diamonds and precious stones. In 2002, I moved to New York City and founded K.Mita Design. Throughout my journey Rebun Island – “the floating island of flowers” – has been an important influence on my life and work.

Early in my career I won numerous awards, including the prestigious JJA Jewelry Design Award in Japan and the De Beers Diamonds International Award (Finalist) in the United Kingdom. In the United States I won the MJSA American Vision Award, the Saul Bell Design Award (Finalist) and the De Beers Diamonds Today Award, among others. More recently my Crown Ring and Ombre Earrings won two InDesign Awards (Second Place) for the engagement and silver categories, respectively. On numerous occasions I have been invited to participate in group shows at galleries (such as SOFA and Aaron Faber) and museums (such as the Kohler Arts Center and the Philadelphia Museum of Art shows). My work also has appeared on television and in jewelry blogs, books and magazines.

I try to create lasting modern designs through themes based on the spectacular scenery and beautiful wildflowers on the stormy and isolated island where I was born. My Japanese heritage and extensive travels are also strong influences. Working primarily in 18K gold and mixed metals, I combine metal textures and complex shapes with diamonds, pearls, and other precious and semi-precious stones. My pieces range from geometric to organic and focus on movement, texture and color.

My Sand Dune collection, which I am offering to the wholesale market, captures the point in time just before deserts and sandy beaches are changed forever by the forces of nature. The emphasis is on texture and movement. My new collection, which I call Element, combines smooth surfaces and clean lines to create complex shapes that defy the simplicity of their origin.

I hope you enjoy my jewelry. I would love to hear from you!